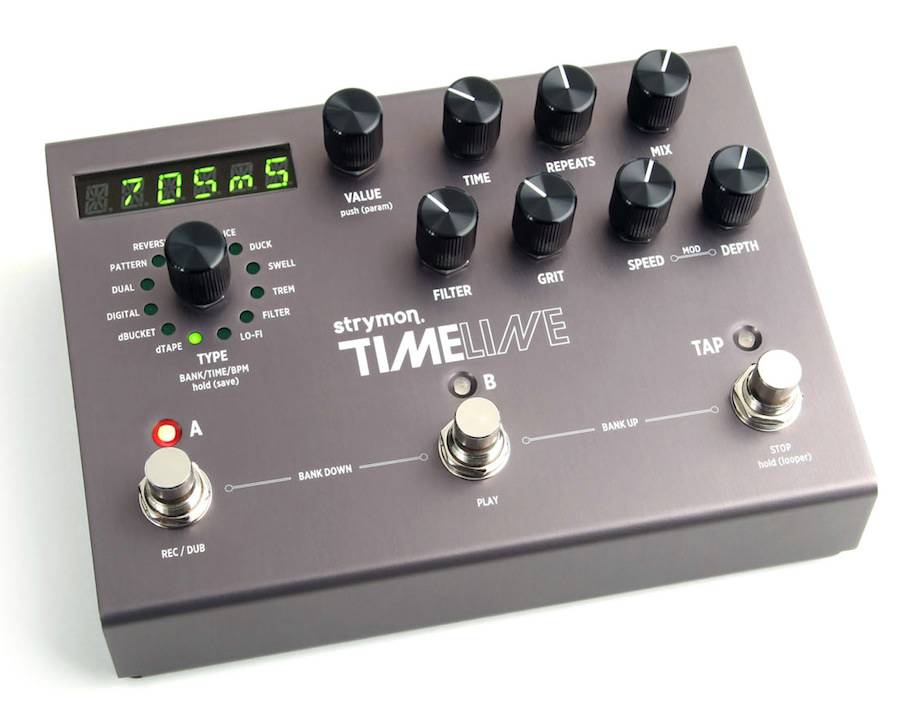 The TimeLine provides you with twelve different delay machines, each with extensive control over sonic character and feel. Tweak to your hearts content and save up to 200 presets of your favorite sounds. Go from crisp and clear, studio-quality digital delays all the way to the saturated and fluctuating sounds of tape delay machines. Get warm and fuzzy analog style repeats all the way to shimmery, sparkling, and crystalline ice delays. Top it all off with full MIDI implementation and a routable, 30-second stereo looper and you’re on your way to delay bliss.

There’s no way to cover everything the TimeLine can do in a single review, but while it’s a pedal of formidable power, its intuitive enough that you can jump right in and conjure about a trillion cool sounds immediately. The 12 delay “machines,” as Strymon calls them, include the dTape tapeecho simulation that’s at the core of the El Capistan pedal, the company’s dBucket analog- delay emulation, and a digital delay—all of which will delight discerning traditional tonehounds. But the less-conventional delays are where the real fun starts. Dual delay adds a second set of repeats that lend a spacious, reverb-like ambience that fans of Radiohead’s Ed O’Brien and Jonny Greenwood will adore. The Ice setting is similarly cosmic, though it does the cool trick of slicing and dicing the delayed signal and playing them back as though they were shards of a broken mirror. And with a capo on the 7th fret of my Danelectro Hodad 12-string, the simplest folk arpeggios became a celestial choir.

The Filter delays enable the addition of a synchronized low-filter oscillator to the delayed signal, as well as resonance adjustment that lends a synth-like tweak and a little mid-’70s Jerry Garcia vowel tone to the repeats. The Swell setting gives your repeats an almost volume-pedal like bloom. Trem lends a cool pulsating warble, while Reverse, when used on bendy, Eastern-flavored lines with a longer delay time and fewer repeats, is a vehicle for mind-bending psychedelic leads.

The dTape and dBucket machines have their own unique set of functions that are assigned to the Filter, Grit, Depth, and Speed controls. For instance, in dTape mode, the Filter control becomes a Tape Age emulation, while the Speed control emulates Tape Crinkle at various levels of decrepitude. Other delays use the Filter, Grit, and Depth, and Speed knobs in a more straightforward manner. But they are highly editable in other ways through use of the Value knob, which can be depressed to give you access to another level of performance-modifying options. The Ice mode, for instance, has a an Interval control that enables to you to tailor the pitch intervals of repeats from one octave down to two octaves up, with everything from major thirds and minor sevenths in between. I used this function to craft very song-specific harmonies. All such settings can be stored as presets, as well.

Are presets your thing? TimeLine gives you the option to instantly save and recall up to 200 of your own presets. Easily bank up or down through your presets using the front panel switches. Or select presets via an external MIDI controller.

* 200 easily accessible and nameable presets, save and recall at the press of a switch

* Expression pedal input with selectable control over knob or combination of knobs,

* Crafted  in the USA