Gretsch was founded in 1883 by Friedrich Gretsch, a young German immigrant. His Brooklyn shop was made for the manufacture of banjos, tambourines, and drums. In 1895, at the age of 39, Gretsch died, and the successful company was taken over by his son Fred.Fred never found an adequate successor, and in 1967 Gretsch was sold to Baldwin Pianos,becoming a subsidiary.

The “Baldwin era” is not generally considered a high point in Gretsch history, though new models were introduced through the seventies and old favorites soldiered on. In 1979, after Fred Jr’s death, Chet Atkins withdrew his endorsement in response to quality problems and Gretsch’s unwillingness to pursue his vision of a solidbody nylon-string guitar. Factory fires in the early 1970s caused serious problems, and production was finally halted by Baldwin in 1981.

In 1989, another Fred Gretsch, nephew of Fred Jr., and his wife Dinah once again acquired their namesake company. Fred Gretsch and long-time Gretsch employee Duke Kramer, who advised Gretsch, turned to Terada of Japan, and production began anew. A range of reissues appeared throughout the nineties to mixed reviews. They were of generally high quality, but with notable non-vintage details and features; occasional US-built “Custom Shop” models were offered at significantly higher prices.
In late 2002, Gretsch and Fender reached an agreement giving Fender most control over marketing, production and distribution of guitars (although the Gretsch family still owns Gretsch Guitars).

Ask for our offer Regular price: CHF 4,390.00 VAT 7.7% included. Without shipping costs.
Description:
Gretsch celebrates the incredible talents of revered country musician Steve Wariner with the G6120T-SW Steve Wariner Signature Nashville® Gentleman with Bigsby. A Grand Ole Opry and Kentucky Music Hall of Fame Member, Wariner is also one of five guitar players in the world to be given the... 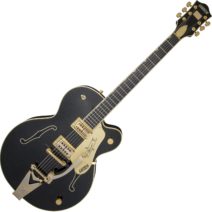 Ask for our offer Regular price: CHF 3,690.00 VAT 7.7% included. Without shipping costs.
Description:
16 pieces for the whole Europe, this means, that baby is...rare... A nod to the early era of rock ‘n’ roll, the G6119TG-62RW-LTD Limited Edition ‘62 Rosewood Tenny with Bigsby® and Gold Hardware is a solid performer with the standout sound and stunning style that have made Gretsch a...

You didn’t find the item you’re looking for?

You couldn’t find what you wanted in our selection of items? No problem! We can get it for you, and at the best price!!!

If you know the brand or the model – or any other reference – let us find it for you. You’ll be informed of the terms and delivery period very quickly.

Contact us by phone or by e-mail or – if you have all the useful information – using the On request form available here.