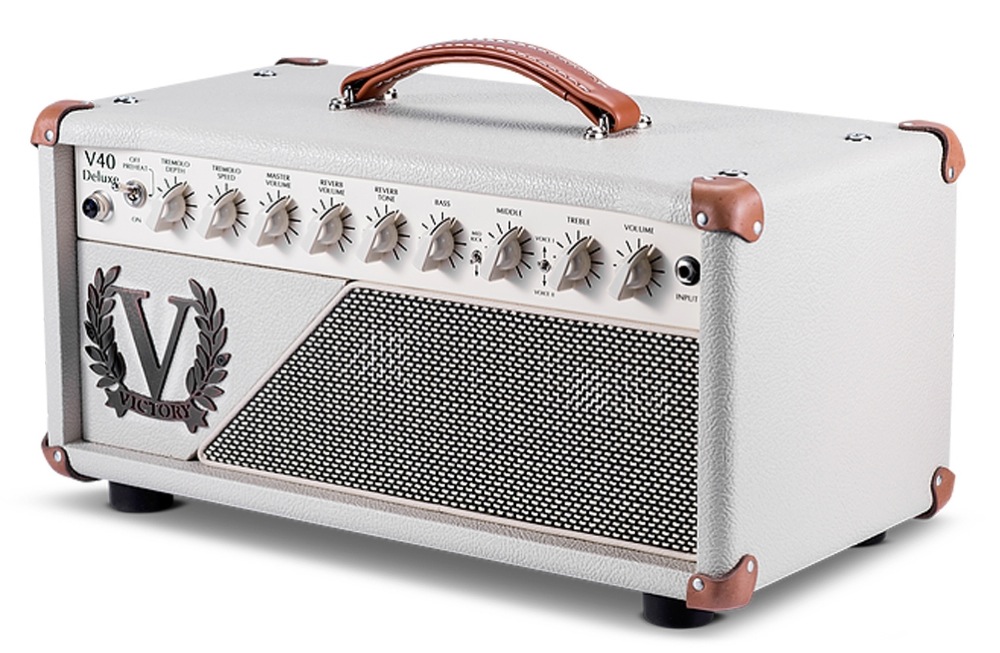 V40 Deluxe lives up to its name in stunning cream vinyl over traditional wooden cabinets with leather corners and handle for a modern-boutique look. You can expect classic American cleans through to pushed tweedy grit and on to driven British blues-rock. The head & cab configuration will give you that extra headroom and flexibility. This is one for the ‘feel’ players: a boutique-standard tone machine for home, studio and stage.

Go from vintage-style Californian tones with single coils, through to a driven mid-’60s British drive all in one channel. Voice II strengthens the midrange at the input for more punch and cut. Compared with V40 The Duchess, V40 Deluxe has slightly more brightness and ‘air’ overall; a step or two away from mid-Atlantic Duchess towards Californian Deluxe. The Mid Kick works in conjunction with the Middle pot to boost midrage frequencies in the EQ section. The more you push the Midde pot, the more it pushes overdriven sounds, especially with humbuckers. Overall you’ll find slightly more overdrive and compression at maximum gain than in the Compact Series V40 The Duchess.

V40 Deluxe benefits from a valve-driven-and-recovered long-tank spring reverb, for authentic, vintage-style ’verb. We’ve also included a Tone pot on the reverb that enables you to go from smooth, dark ambience to much more bright and ‘springy’ sounds. The reverb is also footswitchable on and off. Tremolo was one of the first ever guitar effects that’s been put to stunning use in everything from blues, rock’n’roll, country, rock, Americana, pop and much more. Given V40 The Deluxe’s vintage leanings, it was a shoe-in for inclusion here. Try it with a ton of reverb and wonder how you ever lived without it!