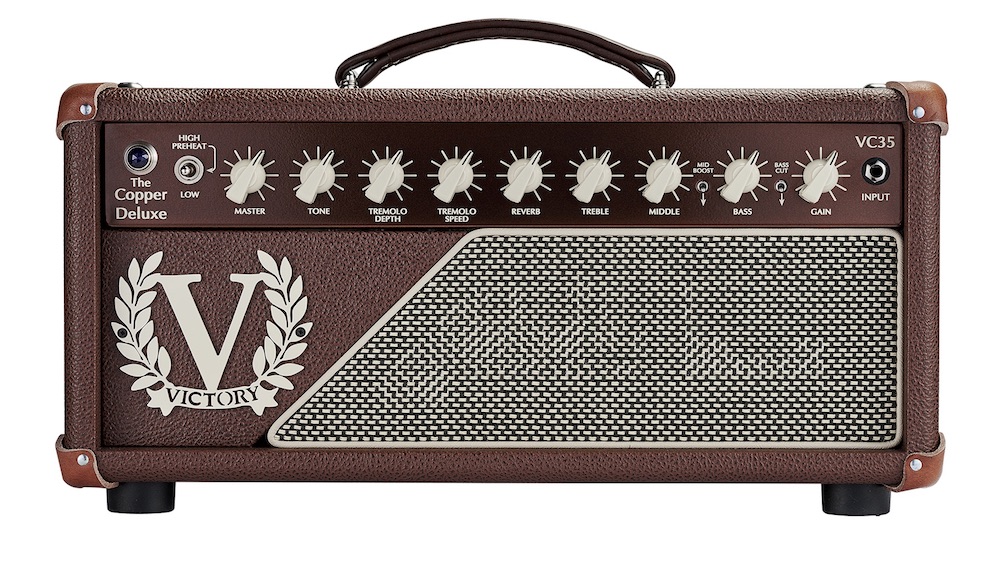 Since Victory introduced the Compact Series VC35 The Copper in 2019 to critical acclaim, it was the first time Victory has entered four-EL84 territory which is all about the fabled ‘chime’. And the rock. And the rock’n’roll. And the roots and the blues and the pop… and anything else you want to coax from a quartet of EL84 output valves in the British tradition.

For 2020 VC35 The Copper will also be introduced in Deluxe form (just as we did with V40 The Duchess and its much-loved Deluxe version). Instead of the skeletonised metal chassis we have pine and ply cabinetry swathed in rich red/brown vinyl. We’ve also added valve-driven spring reverb and valve-driven tremolo which not only makes those effects even more lush and re ned, but also has an overall tonal effect on the rest of the circuit.

“The ‘classic’ EL84 amp has a unique tone and feel with a speci c kind of high-end response that differs from any of our other amps,” says Victory chief designer, Martin Kidd. “VC35 The Copper has gone over so well that it just made sense to offer the Deluxe version. Like the Compact Series amp, this one uses a mix of xed and cathode bias in full-power mode and is cathode biased in low power. There’s also a NOS EF184 pentode valve in a cathode-follower con guration to drive the tone stack in the preamp. We have great stock of them, they have very low microphonics and have proved to be superbly well made and reliable. In addition to the head, we’re also doing a wide body 1×12 combo. We did a bunch of blind listening tests and unanimously decided that a Celestion Alnico Gold was the perfect match – hardly the least expensive speaker in the world, but it sounds incredible in this amp. I think VC35 Deluxe is going to crop up in a lot of very toneful places! ”