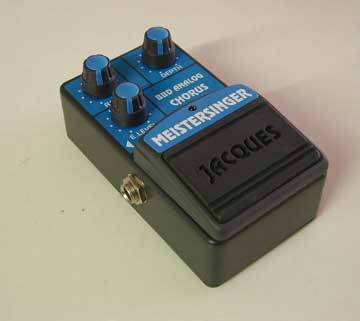 The MEISTERSINGER is an hommage to the best analog chorus made in the past. Boss/Roland of course, which sort of invented it, granted us with such wonderful effect as, CE1, CE2, Dimension D and Dimension C. But the MEISTERSINGER is not a model: it is a true ANALOG delay chips chorus, like they were. It is no imitation, but the real thing. You can count on the fingers of Django Reinhardt the other real analog chorus on the market today.The reasons why analog chorus , or any analog time based effect, sounds better than digital are numerous, But the main one to me is that the detuned tone produced to be mixed with the original, is not exactly the same than the original. Just like would be another guitarist playing along with you:It is quite strange nobody ever evokes this simple strategy. When you manipulate had-tweakable chorus effects ( like the old MXR rack or ADA pitchtraq) you notice a very obvious matter: chorus effect sounds twice better with a negative detune than a positive one. The reason could be a deeper body of the resulting mix or a more complicated comb hamronics effect. Anyway this option was chosen for the MEISTERSINGER, which fears no one for the best chorus tone ever. No kidding.