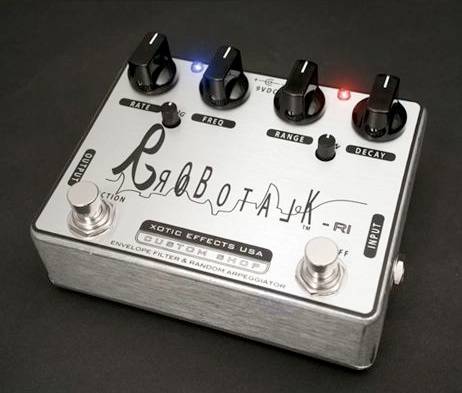 Xotic Effects began bringing the funk with the original Robotalk. A dynamic envelope filter with a wild and expressive arpeggiator, it enabled both guitarists and bassists to get their groove on making the funk happen.

Just a few years ago, Xotic updated the Robotalk to the dual channel Robotalk 2, which is voiced for a more musical envelope effect. Each side was voiced differently and could be played independent of each other. You could also engage both channels for some added depth and amusement.

Xotic’s dedicated fans keep persisting that they return the arpeggiator function, as they stated this was one of the original Robotalk’s best and most unique features.

After much R&D, the Xotic Effects Custom Shop has reengineered and revitalized the original Robotalk. Now in a compact size, they’ve improved its unique envelope filter tone. But they’ve also enhanced the arppegiator with more wonderfully strange and mesmerizing sounds.

The reissue is available now, but due to the complexity of the new Custom Shop Robotalk (RT1-RI),initial builds will be limited to only 240 units.

* footswitchs de mode et On / Off