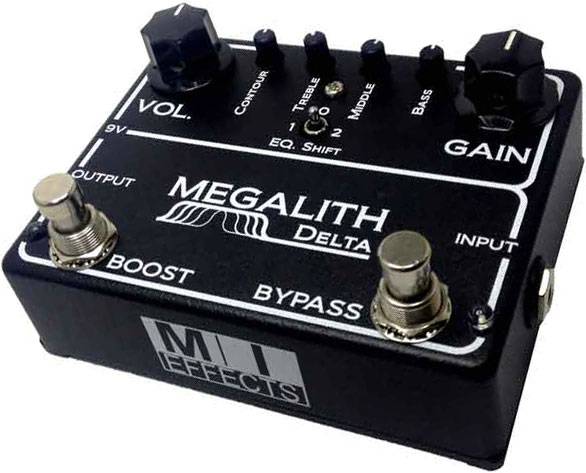 The Megalith Delta is a valve-like, JFET (transistor) interpretation of the Megalith amplifier providing the huge bottom end, along with the character and clarity of the top end that signifies the Megalith name. Not only has Michael Ibrahim, director of MI Audio, and pedal designer comments “The Megalith Delta high gain distortion pedal design came from years of R&D of our MI Amplification high gain amplifier, the Megalith Beta. It took some time for me to really understand the variables behind great high gain tones. But by designing the Megalith Beta amplifier from the ground up, I was able to really grasp how to make a complex, sophisticated high gain sound that kept all the nuances, huge bottom end and the clarity and character of the top end”. The preamp been painstakingly recreated, but the interaction of the power amp and phase inverter has also been considered to create a high gain sound unheard of in pedal form.

The flexible and unique EQ section is comprised of three main controls; EQ SHIFT switch, THREE-BAND EQ and CONTOUR CONTROLS. The powerful THREE-BAND EQ, coupled with the three-position EQ SHIFT SWITCH (which shifts the EQ’s bands) allows for the minute control over different frequencies. Rounding out the EQ section is the CONTOUR control; a control that mimics the effect on the frequency response of the phase inverter in the power amp. One sweep of the CONTOUR goes from old-school; fat and midrangy, with a slightly rolled off top end, to a trademark modern high gain sound… the mids start to scoop out, and the sub-bass frequencies tighten up.