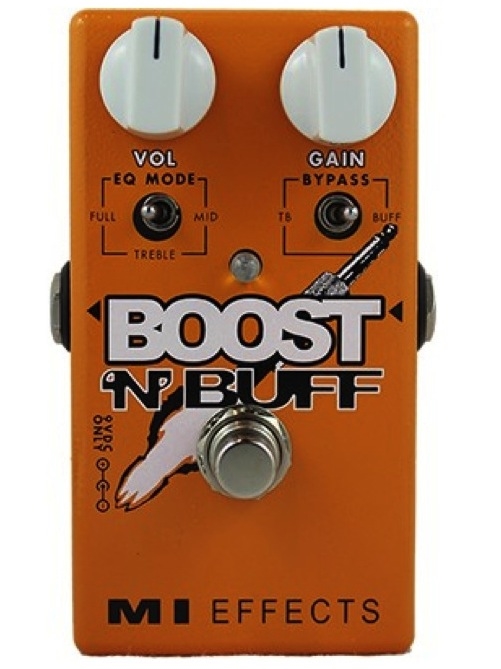 The Boost ‘n’ Buff V4 is a booster and a buffer pedal that should be an essential on every pedal board, whether to keep your original guitar tone intact or to boost the signal  in three different ways; FULL, MID and TREBLE. The super quiet, Class A (single transistor) design provides a huge 35dB boost when engaged and acts as an ultra high input impedance buffer (5MΩ!) in bypass mode.

Bypass Mode/Buffer: In Buffer bypass mode, the Boost ‘n’ Buff V4 acts as an ultra high input impedance/low noise buffer when the Buffer mini switch is engaged. In fact, the input impedance is approximately 5Meg. With such a high input impedance, your guitar pickups don’t need to deliver a lot of current in order to reproduce their full natural bandwidth. You can drive cable lengths as long as you like without sacrificing tone, and due to the ultra low noise design, you can use the Boost ‘n’ Buff out the front of dirt pedals or high gain amps without worrying about introducing any significant noise.

By adding the Boost‘n’Buff V4 in your signal chain, especially near the front of your effects, you’ll notice that in bypass mode your guitar signal will have a bit more sparkle and top end detail. It’s not that there are any special EQing ‘tricks’, but rather that the Boost ‘n’ Buff is faithfully reproducing all of the frequencies that are coming out of your guitar. Your tone will feel a bit more powerful, with more punch and almost as if there’s more dynamic range and ‘sustain’ (although these are not the right words to describe it). You’ve got to try it out to feel what I’m talking about.

Full Boost: This is a full frequency boost regardless of the gain and volume settings. It not only boosts the volume, but seems to really lift your tone as well. It’s difficult to explain. You’ve just got to feel it. This is perfect for solo volume boosts. The one thing to note is that if you’re going to use digital effects in your signal path, I’d suggest putting the Boost ‘n’ Buff after the digital effects to avoid overloading the A/D converters.

Another interesting application is using the Boost ‘n’ Buff in the FX loop of an amp to act as a secondary volume control. Since it has ample headroom, line level signals are not a problem. So even if your FX loop is line level, you can still get quite a bit of boost using the Boost ‘n’ Buff. This way, your FX loops can also double as a solo volume booster as well as a standard FX loop. By putting the Boost ‘n’ Buff in the FX loop, you can use it to boost the volume of an overdrive channel. If you’re using the overdrive channel of your amp, then putting any booster between the guitar and amp will just increase the amount of distortion as opposed to increasing volume. By putting it AFTER the preamp (in the FX loop), you can achieve volume boosting without affecting preamp tone.

Treble Boost: I tuned this mode to be a more of a dramatic treble boost than the stock Boost ‘n’ Buff. I figured that if the full boost option is now available, then it would be possible to make the treble function a bit more prominent. At maximum gain, not only do you have an amazing amount of boost (approximately 35db), but the frequency response is perfectly tailored to driving a valve amp. It is literally like hot-rodding your amp with an extra tube stage. Also, with the 18V headroom, your sound will be ‘cleaner’ going into the amp, so that there’s less colouring from the transistor.

Mid Boost: This came about because I quite liked how the treble boost pushed an already overdriven amp, but for some amps, I found that too much top end made the tone too harsh (For others it was fine). So by rolling off some of the highest frequencies, and beefing up the mids, we were able to get the extra gain, cut and richness, but without the ice-pick.

Gain Control: Firstly, you can now turn down the volume, and use the built in gain of the Boost ‘n’ Buff to get mild dirt sounds, boosting different parts of the frequency spectrum with the MODE switch. Finally, by mixing the relative levels of volume and gain, you can now coax a wider range of timbres from the pedal.

Like the mixing desks of old, this transistor boost design has DC across the gain pot causing a crackling sound when moved an expected part of the design and one that shouldn’t cause much grief as it tends to be set and forget. Also, each first time you power the pedal, the ON/OFF switch pops. The popping should go away after a few clicks. There a lot of volume gain in the pedals, and it take about 10 to 20 seconds for the power supply voltages to settle, so you will get a some popping. It is worst in the ‘Full’ mode, which has the most bass.

The Boost ‘n’ Buff is a booster and a buffer pedal that should be an essential on every pedal board, whether to keep your original guitar tone intact or to boost the signal  in three different ways; FULL, MID and TREBLE. The super quiet, Class A (single transistor) design provides a huge 35dB boost when engaged and acts as an ultra high input impedance buffer (5MΩ!) in bypass mode. – See more at: http://miaudio.com/effects/boost-n-buff/#sthash.aTCJH9dG.dpuf