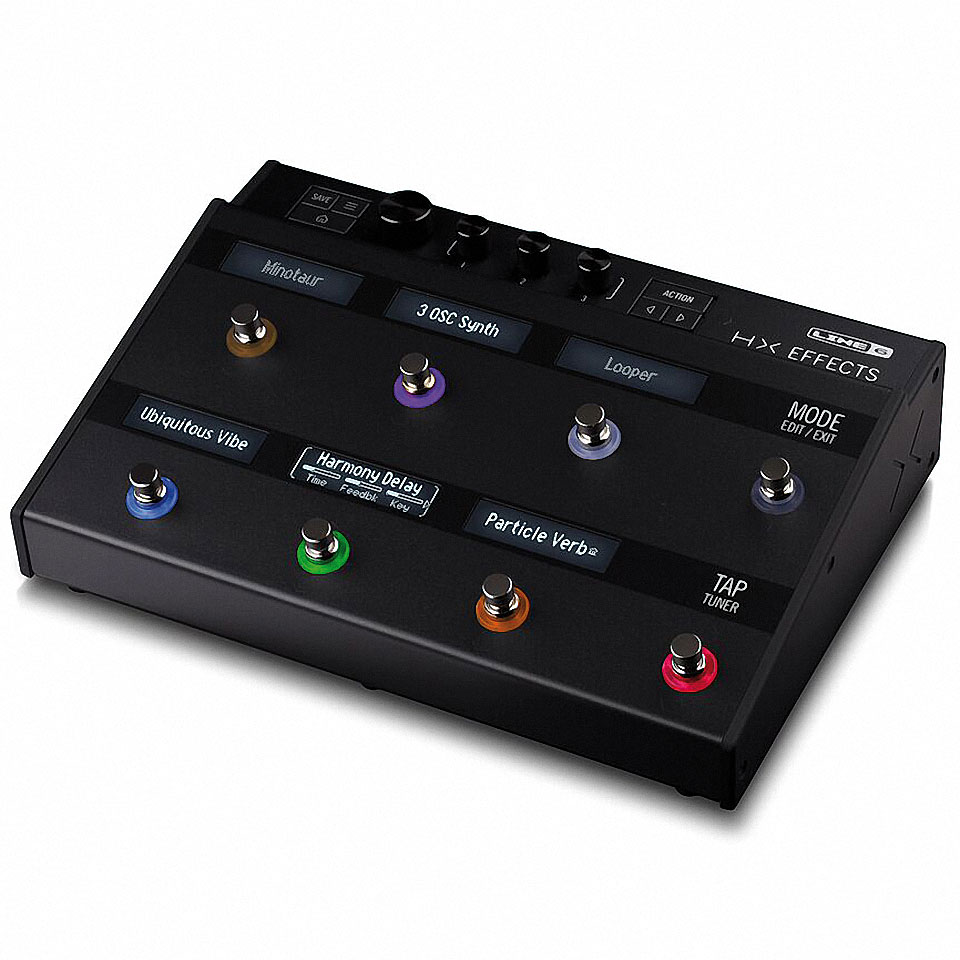 The new Line6 HX effects takes the same technology as used in the Helix pedalboard, but streamlines the range of functions to include the effects models only; perfect for guitarists who still like to use a ‘real’ guitar amplifier and simply require access to a huge range of multiple effects (in a much smaller and self-contained package than your average pedalboard).

The HX Effects can run 9 effects simultaneously, and lets you choose between 100 effects models from the Helix range. It also includes a range of legacy effects from the popular M-Series and Stompbox Modeler pedals.

Touch-capacitive footswitches allow you to edit sounds simply by placing your finger on any metallic pedal switch – this lets you instantly access an individual pedal to alter its parameters; simulating the way you’d access an individual stomp-box on stage. The 6 ‘scribble strip’ LCD screens also allow you to add custom text, making live performance a clear and simple affair.

Helix HX includes a choice of analogue bypass or DSP bypass models with trails, alongside an incredible 123dB of dynamic range for exceptional response and low-noise. An ability to load your own Impulse Responses is another powerful feature, should you wish to run a direct signal to front-of-house or a recording device.

The power of Helix modelling is fully implemented in the HX Effects, even down to the digital re-creation of a real light bulb for the ‘vibe’ effect – the Helix’s version of this model sounded particularly ‘chewy’ and organic.

The power of the HX Effects is also in its connectivity – it has a 2 amp-switch outputs for channel changing, 2x send/returns to incorporate your own pedals or use in the amp’s effects loop, and stereo in/out. The HX Effects has the versatility to control your compatible amplifier and can be utilised in the 4-cable method; allowing you to send some effects into the front-end of the amp, and some effects into the FX Loop.

The HX Effects provides a lot of power, sound, and control options, in a throgouhly compact package. To get the same level of control with individual devices would lead to a large and complex setup; with the HX Effects, everything is provided in a stand-alone unit.