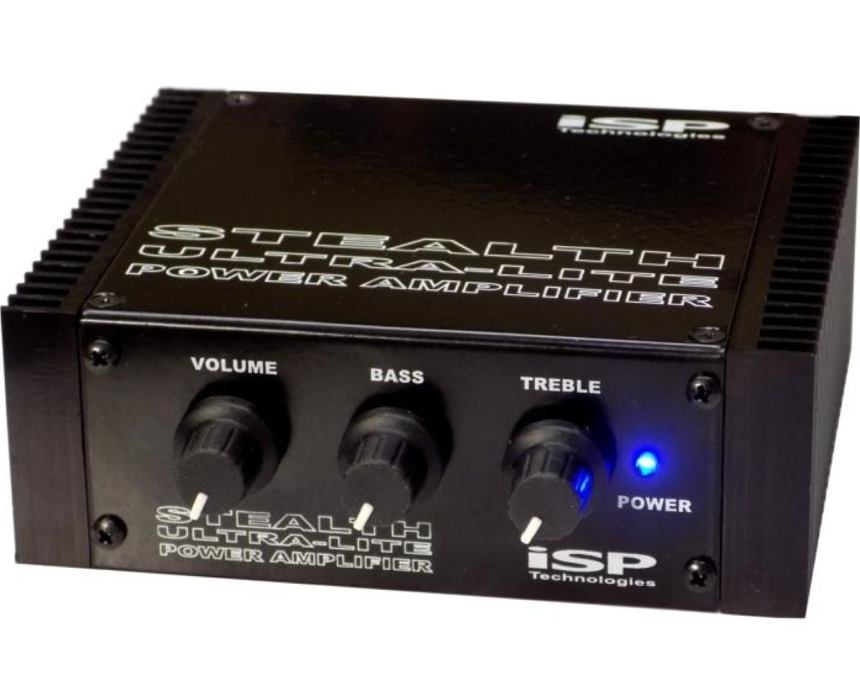 The built in preamp is designed to allow instrument level pedals to directly drive the STEALTH ULTA-LITE to maximum output level plus you have the added tone shaping capability of +/- 10dB bass and treble control providing up to 47db of composite signal gain. The flexibility of the STEALTH ULTRA-LITE built in preamp also allows direct interface with professional +4dB rack mount signal levels.
The STEALTH ULTRA-LITE offers efficiency close to that of a Class D amplifier but has the great tone and overdrive clipping characteristics of a Class A/B analog power amplifier. The STEALTH ULTRA- LITE weighs less than one pound, but packs the performance of a true 90 watt guitar preamp / power amplifier all in a package size of 1.73 inches tall by 4 inches deep and only 4.9 inches wide. Drop the STEALTH ULTRA-LITE on your pedal board and end up with a true compact rig with enough power to play with a drummer on stage. The STEALTH ULTRA-LITE will deliver a true 90 watts RMS 180 watts peak into a 4 ohm load (60 watts RMS 120 watt peak into 8 ohms) and comes with a universal switch- mode power adaptor that will operate on any line voltage between 100 and 240 volts worldwide. Tour with confidence knowing that the STEALTH ULTRA-LITE will operate anywhere in the world, on any AC mains, with the included universal power supply. ISP has also designed in Pop free operation with protection against shorts, open circuits and thermal runaway.