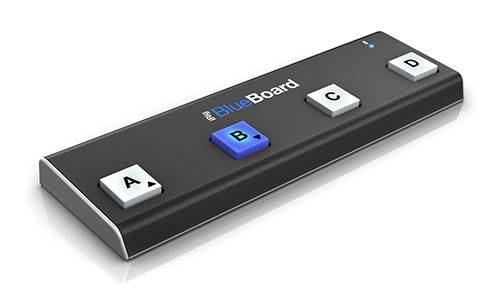 The iRig BlueBoard is a groundbreaking new Bluetooth MIDI pedalboard for iPhone, iPad and Mac, which gives you a hands-free control of mobile and Mac music apps. Any app or software MIDI compatible can be operated wirelessly with iRig BlueBoard.

This ultra-portable unit uses Bluetooth 4.0 technology to transmit the actions of its four onboard, backlit footswitches and its two optional external pedals to the mobile device or Mac. Then using the included iRig BlueBoard app and software, the Bluetooth signals are converted into MIDI messages and routed internally to the music app that’s running on the device.

Because it’s wireless, iRig BlueBoard lets you setup onstage without being tethered to your mobile device. The unit’s range is 10 meters (over 32 feet), giving musicians a great deal of mobility to roam the stage that would be impossible with a wired unit. Because the footswitches are backlit, they’re easy to see in all lighting conditions, even on a dark stage. Additionally, the fact that iRig uses wireless Bluetooth leaves all the wired ports of the device free, so they can be used simultaneously by interfaces or controllers that feature the 30-pin or Lightning connector, like IK’s iRig HD, iRig MIDI or iRig Keyboard, and adapters or microphones that use the device mini-jack such as iRig or iRig MIC.

*  4 backlit switches for sending program, bank and other MIDI messages

*  Small enough to fit in a laptop bag