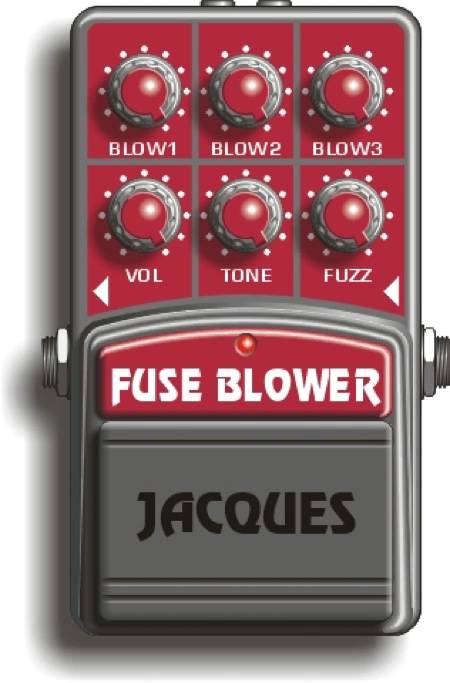 Further than its distinctive own growl, The FUSE BLOWER II ‘s three distortion engines allow any classic vintage distortion tones as well as modern “shredding“ solo sounds. Versatility and personality can at least live in peace in a compact pedal.Each BLOW mode is a FUSEBLOWER voiced differently: BLOW1 is voiced for low end , BLOW2 for mid-boost and BLOW3 for treble bite. This 3 different distortions can be set independently one from each other, thus allowing any tailored combination.Yes, you will spend more time finding your own signature tone but now with the fb2 will eventually let you perform distortion sculpting as an art form as opposed to factory presets. Be unique.A distortion pedal must follow the guitar signal , in order to react to the guitarist playing shades. A simple test is to lower the guitar volume and observe if the distortion amount decrease accordingly. The FUSE BLOWER II excels in preserving the original tone of the guitar pick-ups as well as the sound of the amplifier it is plugged in, unlike many effects which give the same tone on any gear. Using old time analog technology ,The FUSE BLOWER II insures nevertheless a noise ratio compatible with modern digital recording, giving electric guitar takes the authenticity they badly need.Before public marketing, the FUSE BLOWER II has been tested on tour by European professional guitarists, already users of JACQUES STOMPBOXES hand-made FUSE BLOWER, under special no-mercy stage abuses. The optimal results allow a 3 year no-questions-asked 10 days replacement warranty .