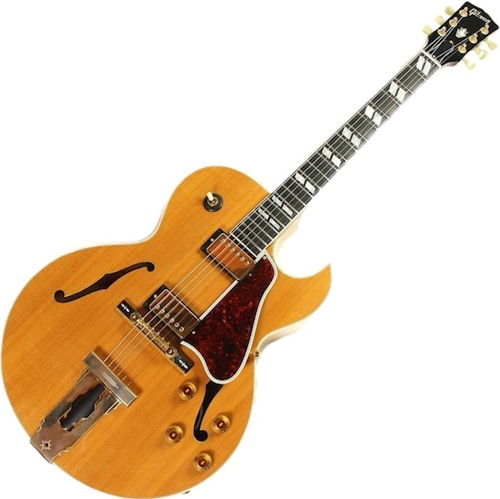 Here’s a rare find, not as rare as the original L-4CES from 1958, but still very hard to find, even rarer in the wonderfull natural finish. While a few examples were built by special order in 1958 only, and reissued in 1969 in a batch of just 9 instruments, the L-4CES did not become a regular offering in the Gibson catalog until 1986. Also, from 1993 to 2002, Gibson proposed the L-4CES with a laminated  figured maple back & sides instead of the mahogany introduced in 1986. This late 90’s Natural L-4CES is in excellent shape, only shows minor playwear and has one of the most beautifull one piece figured maple back we’ve seen on such guitars.

The 16″ Florentine cutaway body of the L-4 CES shares the same dimensions as the ever-popular ES-175, as well as the inlay pattern, which is found on the L-7, L-12, ES-350, Super 300 and other classic models. Differing from the ES-175 however, the archtop solid spruce top and the L-4CES neck pickup is placed right at the end of the fingerboard, for a warmer voice through the amp. The L-4CES is considered as an entry level Archtop in the Gibson catalog, much more expensive than a ES-175 but still affordable as way less expensive compare to a L-5CES or a Super 400…

Our late 90’s L-4CES was played, very weell played and gently played indeed, and only shows minor scuffs and playwear. Only 2 dents on the top are visible and 2 other tiny dents are almost invisible. Sides shows no playwear at all, and some light scratches can be found on the upper part of the back of the guitar. No break, no damages, no deep scratches, it really remained in an excellent condition, almost dead mint. Frets are intacts and shows no dents or playwear, fretboard is also perect, and only some finish flaws on the edge of the binding on a few frets and on the headstock plate under the machine heads.

Comes with its original case and some originale paperworks.