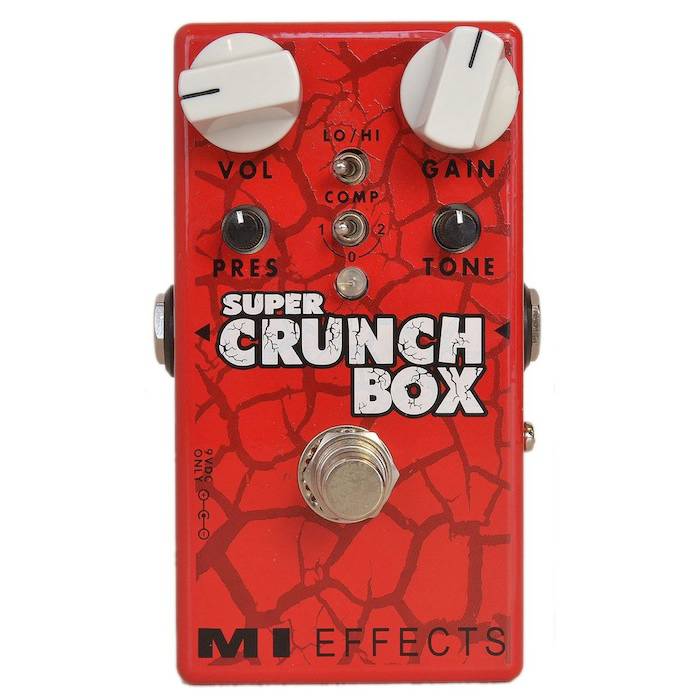 The MI Effects Crunch Box has become a modern-day classic that has garnered a loyal army of fans. We have re-designed the original and added new features to take this British stack-in-a-box to the next level! External PRESENCE control, COMP switch and LO/HI gain modes now makes the Super Crunch Box the authority on British amp distortion for any era!

To pull these great lower gain sounds, switch on over to LO mode. Use COMP 0 or 1 and turn the GAIN to half. The increased operating voltage via some circuit wizardry provides the pedal with 18V (with a 9V ONLY input) means more top-end and clarity, more headroom, more amp-like response and feel. Give the guitar a soft strum with your fingers and you can hear a small amount of breakup. Now strum hard with a pick and hear the extra gain and harmonics. Turn the GAIN up and roll back on your guitar volume. This LO mode allows for different breakup sounds and clean tones a la Plexi amps of the 60’s – all accessible with your hands.

Switch on over to HI mode, COMP on 1 or 2, and you have that classic, 80’s hot-rodded Marshall tone the Crunch Box has become synonymous with. This is perfect for those stadium rock riffs, shredding lead tone with pinch harmonics for days!

Use the TONE and PRESENCE controls to dial in anything from bass-heavy stoner rock riffs, to a mid-heavy solo tone, or some punkish top-end jangle. The Super Crunch Box can cover any British inspired tone you can think of. The PRESENCE control is also a quick go-to control when swapping between different guitar/amp setups. This control will allow you to sit well in a mix regardless of a dark amp or harsh pickup.

Want to take it up an extra step? Pair the Super Crunch Box with the Super Blues Pro. Since the tone shaping is similar to the Blues Pro, the duo make for a one-two punch for an infinite amount of drive possibilities.