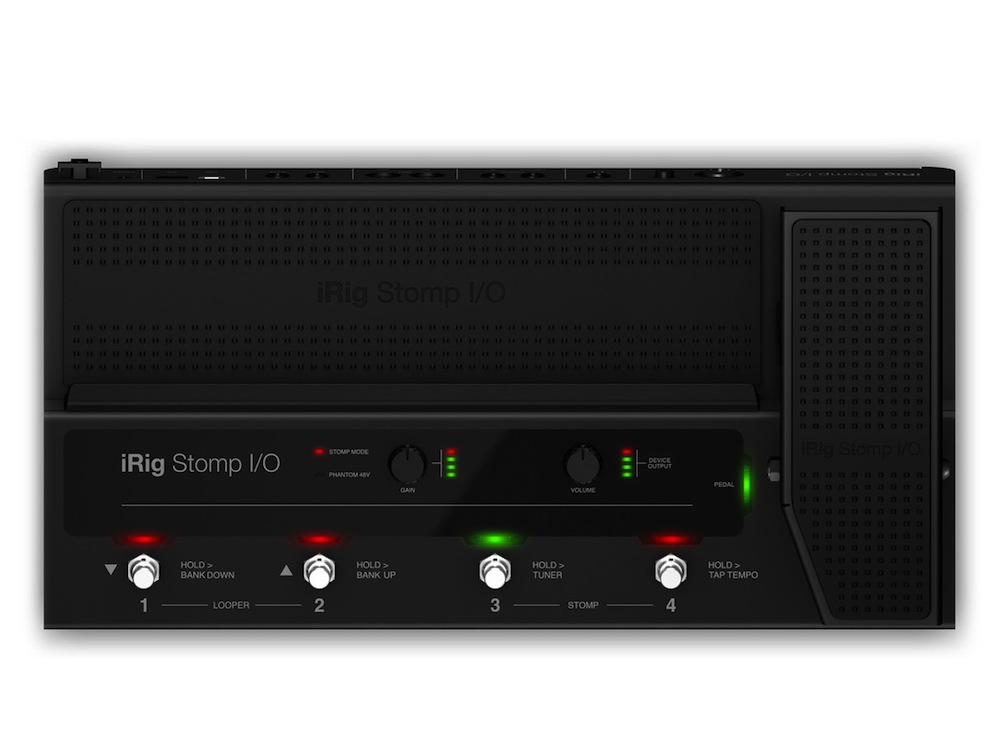 The IK Multimedia iRig Stomp I/O’s all-in-one design makes it useful in a variety of situations. You can use it as a USB pedalboard controller or an audio interface for your Mac, PC, or iOS device. It can also work as a standalone MIDI foot controller. The iRig Stomp I/O delivers 24-bit/96kHz audio, features a great-sounding mic preamp with phantom power, and comes with a host of practical I/O. An integrated device bay makes positioning your iPhone, iPad, or Microsoft Surface easy. The iRig Stomp I/O can be powered via USB or the included adapter and comes with an array of useful software and apps.

Whether you’re recording, rehearsing, or performing, you’ll find a use for the iRig Stomp I/O. As an audio interface for your Mac, PC, or iOS device, the iRig Stomp I/O captures sound at 24-bit/96kHz. Input Gain and Volume controls, along with LED input meters make dialing in your levels easy. A hi-Z/mic/line combo input, balanced stereo line output, and headphone output give you plenty of I/O for recording and playback. And the built-in Class A mic preamp features +48 phantom power and 46dB of gain, more than enough to accommodate your favorite condenser microphone.

As a pedalboard controller, the iRig Stomp I/O features seamless, plug-and-play integration with AmpliTube and VocaLive. An expression pedal and four foot switches make it easy to scroll through your favorite presets. You can also connect up to two additional external pedals or switches via a pair of external control inputs. You also get MIDI I/O for sending MIDI control messages to your external gear and processors, so you can use the iRig Stomp I/O as a standalone MIDI foot controller.

Integration with AmpliTube and VocaLive makes the iRig Stomp I/O a useful tool for guitarists, bass players, and vocalists alike, both for recording and for live performance. Hook the iRig Stomp I/O up to your iPhone, iPad, Mac, PC, or Microsoft Surface, and it’s child’s play to browse tone presets, preset banks, control wah processors in real-time, and access useful functions like the looper, tuner, and more.