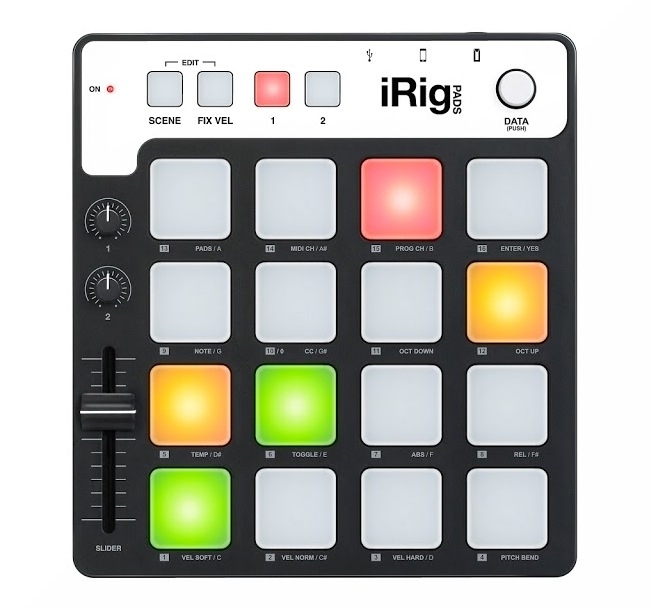 Introducing iRig Pads, a full-featured ultra-portable 16-pad MIDI groove controller for iPhone, iPad and iPod touch as well as Mac and PC. An extremely versatile system, it lets you make beats, launch loops, mix like a DJ and a whole lot more no matter whether you’re on stage, in the studio or anywhere between. It’s the ultimate travel companion for the mobile electronic music producer on the go. iRig Pads is so portable that you can take it with you anywhere. It’s smaller than an iPad and less than 1” thick (23mm). It features a slim, compact and lightweight design that can be slipped into any backpack or laptop bag and carried around with ease. And for even greater portability it’s been designed with ultra low-consumption, which means it’s fully functional as soon as you connect it into its host device — You don’t need a power adaptor. Just plug it in to your iPhone, iPad or iPod touch via its included Lightning cable (30-pin connector sold separately) or your Mac or PC via its included USB cable and start groovin’.

But iRig Pads does more than your average mobile pad-based MIDI controller. Its full set of controls — two knobs, two pushbuttons, one slider and one pushbutton rotary encoder — provides a versatility that lets you be in control in any situation. All controls are MIDI assignable and customizable: Up to 16 distinct MIDI maps or “scenes” can be saved and recalled instantly for full control of apps and software. It comes with 6 pre-programmed default scenes that allow it to work with popular apps and software right out of the box.

Or, if you’re on a Mac or PC, you can take advantage of the included SampleTank 3 SE — soon to be available as a download from the IK user area. It lets you get creative with a fully featured version of IK’s next generation sound and groove workstation with 6.5 GB of content, for over 400 instruments and 150 MIDI patterns. Combined with iRig Pads, it creates a complete music production workstation that gives you a full palette of sounds that will help you take your beats to the next level. A natural fit for iRig Pads, SampleTank lets you quickly and easily organize your sounds, patterns and loops over the pads. With them paired together you’ll have a powerful, customizable beat making powerhouse!

And you’ll be able to register your iRig Pads to receive The Grid, an exclusive collection of 50 additional instruments (comprised of 800 samples for a total of over 300MB of sample content) and 50 MIDI patterns that can be downloaded from the user area for SampleTank 3 SE that can also be used on SampleTank iOS (unlockable inside the app when available).

Beyond its music-making abilities, iRig Pads can also be used for live DJ mixing. You will also soon be able to use it with DJ Rig free for iPad. It’s a full-featured DJ mixing app that lets you sync and blend the songs in your device’s iTunes Music Library via two virtual turntables. With iRig Pads you’ll be able to push the pitch, control effects and EQs, cue samples and enjoy nearly full tactile control of the app. With iRig Pads and DJ Rig, you have a portable DJ setup that you can take with you anywhere.