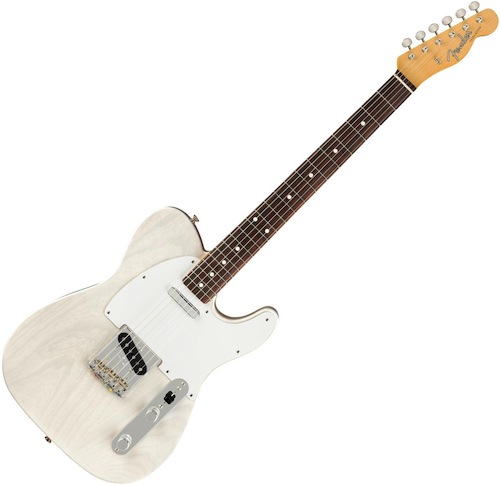 Jimmy Page is hailed as one of the greatest and most influential guitarists of all time. His genius riff-writing is widely recognised as being at the forefront of Led Zeppelin’s worldwide success. And it’s clear to see why…

Starting his career out as a session musician, Page soon became one of the most sought-after guitarists in the world. Collaborating with artist such as The Who, The Kinks, and even Keith Richards, it didn’t take long for Page to make his mark on the rock music scene. His distinct tonal character caught the eye of blues-rock band, The Yardbirds; a band famed for igniting the careers of Eric Clapton and Jeff Beck, as well as Page. His time playing with them would later lead onto the historic formation of none other than Led Zeppelin.

If you’re a guitarist who prefers a thin ’60s neck profile with a little more meat, the Jimmy Page Tele’s Thin D shape is your cup of tea. In 1959, Fender started doing rosewood fingerboards on Telecasters, and that’s what this one has, along with a comfortable vintage-spec 7.25″ radius. Fingerboard designs have flattened out over the decades, the theory being that flatter radii are better for soloing in the high register. The fact remains that Mr. Page was a prodigious soloist on his Tele (after all, he played the epic “Stairway to Heaven” solo on it). And that’s all we have to say about that.

These Jimmy Page Custom ’59 single-coils are designed to Jimmy’s exact specifications to deliver the searing Tele bite and visceral crunch we all know and love from early Zeppelin records. And trust us: these pups pack a punch. After all, the originals had the power to cut through one of the heaviest rock rhythm sections of the ’70s: John Paul Jones and John Bonham.

The Jimmy Page Telecaster gets an extra dash of authenticity with its 2-piece ash body and nitrocellulose lacquer finish. Nitro finishes — standard back in the day — are significantly thinner than today’s polyurethane finishes, allowing the guitar to “breathe” and age gracefully. Nitro finishes not only look amazing; they also enhance the instrument’s tonal qualities. This guitar has the look and feel of a lovingly cared-for classic — one that will only improve in the decades to come.